The idea to establish an Association in the name of Günter Grass (1927−2015) was the fruit of conversations held between two citizens of Gdańsk: the Danzig-born Heidrun Mohr-Mayer from Pforzheim and Ewa Rachoń whose family came to Gdańsk after the war from Vilnius. Together with an Initiative Group composed of representatives of culture, science, business, media and authorities in Gdańsk, Rachoń – the then commissioner of the Amberif Fair – took on the fulfillment of this task.

On December 10th 2001, 43 aficionados of Grass’s oeuvre met in the Actor’s Club in Mariacka Street. It was then that the decision to establish the Günter Grass Association was made. The Association’s name and goals were accepted by the Günter Grass House in Lübeck. According to the statute, our priority is to support the initiatives aiming at collecting, documenting and presenting the literary, critical, journalistic, artistic, film and photographic materials connected with Günter Grass’ oeuvre and his relations with Gdańsk.

The Association’s goal is to undertake and support all initiatives aiming at collecting, documenting and presenting the materials connected with Günter Grass’ oeuvre, as well as commemorating the history of the multiethnical Gdańsk.

The Association has been the co-organizer of such events like: anniversaries of Günter Grass’s birthday celebrated in Gdańsk in 2007, 2012 and 2017, exhibitions concerning Grass’s artistic output, international conferences and workshops for doctorate students and renowned researchers. The Association collaborates with various cultural and scientific institutions and organizations, among which are: the University of Gdańsk, Günter Grass Gallery in Gdańsk, Chodowiecki and Grass House, the Kashubian Institute, and the Scientific Society in Gdańsk.

After the registration of the Association on August 4th, 2003, its first Board was constituted. Its first president was Maciej Kraiński, then prof. Mirosław Ossowski, and currently Assoc. Prof. Miłosława Borzyszkowska-Szewczyk

The Association gathers people of culture, science and education. Presently, it consists of 52 members, including three honorary ones (as of June 2022). Its logo depicting a snail was designed by Andrzej Taranek.

The Association organized many events inspired by the Nobelist’s work. Among them was, for example, the Günter Grass’ Day as part of the program of the Dominican Fair 2004. It included the screenings of The Tin Drum and Cat and Mouse in the Neptun Cinema, followed by a discussion and a photo exhibition. In front of the cinema, in Długa Street, a performance of the percussion band called Jeunesse Musicale took place. The evening was concluded by “The Theatre of Cooking according to Günter Grass” which became the Association’s tradition. 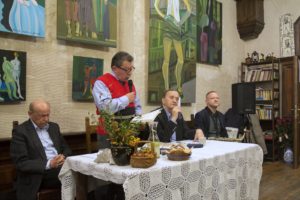 Our Association also initiated and co-organized cultural and scientific events connected with the anniversary of the writer’s 80th birthday in 2007, as well as his 85th birthday in 2012, and his 90th birthday in 2017. In 2012 we co-organized, among others, the International Workshops „Günter Grass – Dzieło i recepcja / Werk und Rezeption” [Günter Grass – Work and Reception] at the University of Gdańsk, targeted at both the experienced, as well as young researchers of Grass’ work from Croatia, Denmark, Germany, Poland and Russia. An important part of these workshops was the author’s meeting with Günter Grass himself.

A debate with Günter Grass, the University of Gdańsk, 2007. Photo by Ewa Rachoń

In 2017 we co-organized 3 exhibitions concerning the artist: an outdoor exhibition “Günter Grass – looking from Gdańsk” (together with the Günter Grass Gallery in Gdańsk and the Chodowiecki and Grass House), “GG at UG” at the University of Gdańsk, and “Grass and the Kashubia/ns” in the Günter Grass Gallery in Gdańsk. During that year we also participated in the following publications: “The Gdańsk Encyclopedia of Günter Grass” edited by Mirosław Ossowski and Marek Jaroszewski, „Günter Grass – Odpominania / Entinnerung. W 90. rocznicę urodzin / Zum 90. Geburtstagsjubiläum” – a commemorative volume edited by Miłosława Borzyszkowska-Szewczyk, and „Grass a Kaszuby/i. Grass a Kaszëbë/Kaszëbi. Grass and Kashubia/ns” – an exhibition catalogue edited by Marta Wróblewska and Miłosława Borzyszkowska-Szewczyk. 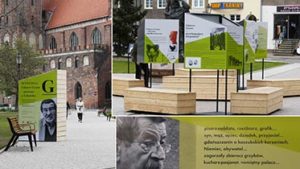 Our heads are full of ideas! Please share yours with us!

The Statutes of the Günter Grass Association in Gdańsk