German writer, printmaker and sculptor, born in the Free City of Danzig; winner of the Nobel Prize in Literature (1999), Honorary Citizen of the City of Gdańsk (1993), citizen of Lübeck by choice. He received the title of Doctor Honoris Causa from the University of Gdańsk (1993) for his outstanding literature and his contribution in the Polish-German reconciliation. He was an omnicreative and engaged artist, active in many areas of artistic and social life. Believing in the power of word, he had the courage to try to change the world after the catastrophe of the Second World War, accounting for the German past and memory. 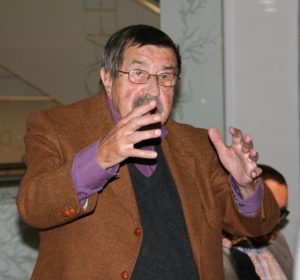 Grass was born on October 16th, 1927 in the Free City of Danzig, into a German-Kashubian family. He grew up in today’s Lelewela Street in Gdańsk-Wrzeszcz (formerly Labesweg in Langfuhr). In September 1944 , the seventeen-year-old Grass was conscripted to the Waffen-SS. Over the last months of the war and into 1946, he was held in  prisoner of war camps in Bavaria. After the war, he studied at the Academies of Fine Arts in Düsseldorf and Berlin. Since 1945, he advocated for the reconciliation between Poles and Germans. He supported Willy Brandt’s Eastern policy. In 1992, Grass established a foundation in Berlin, in the name of another Gdańsk-born artist – Daniel Chodowiecki. Its aim is to enhance the cooperation between German and Polish artists.

“The Danzig Trilogy” encompassing The Tin Drum, Cat and Mouse and Dog Years brought Grass world-wide recognition. Through these books he introduced Gdańsk, as well as the Kashubian and Pomeranian regions – a microcosm of the Polish-German frontier – into international literature. Shaped by the cultural experience of his multiethnic family, he searched for the “third ways” which would constitute an alternative to the nation-based narrations. He pictured the man and the society within a cultural liaison, on the crossroads of ideologies, also mindful of the “counter-memory” represented by minorities. In this way, Günter Grass is considered the first post-war writer who, in his novels originating from Gdańsk and Pomerania, integrated the German, Kashubian, Polish and Jewish narrations about the common, yet divisive, past.